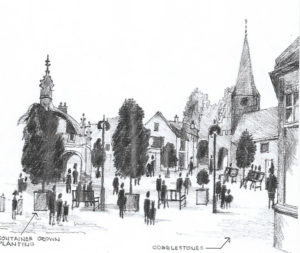 The project to transform Malmesbury’s famous Market Cross into a traffic-free, environmentally friendly area has received unanimous support from those attending a recent presentation by Terry Fox, who has been masterminding it .

Mr Fox gave a detailed summary of his plan to a packed meeting of Malmesbury’s University of the Third Age (U3A) and some members of the public, in the Town Hall recently. Many questions were asked but, to a show of hands at the end of the meeting, there was unanimous support.

One of these attending was Malmesbury Town Councillor Catherine Doody, who said: “It was a very interesting and comprehensive presentation, which will now need to be carefully considered by the full council”.

Terry Fox, a retired architect who has lived in the town for over 30 years, has spent many months preparing his plan by speaking to local residents and researching similar examples elsewhere.

In principal, the plan would mean that, instead of parked cars occupying much of the space immediately behind the Market Cross, there would be public seating, tables, trees and other planting, plus traditional lighting. Residents and visitors alike could buy refreshments from retail outlets in the immediate area and then enjoy them in a clean, pollution- and traffic-free environment. The whole central area would be more pedestrian friendly. Similar proposals in other towns have resulted in increased footfall for local businesses, and increased tourism.

Mr Fox said: “I was delighted with the response. It will be interesting to learn in due course the response of Malmesbury Town Council.”