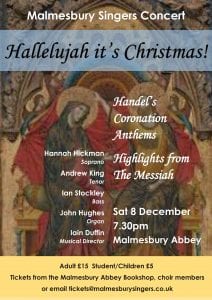 Malmesbury Singers invite you to join them for their 2018 Christmas Concert which takes place in Malmesbury Abbey on Sat 8th December at 7.30pm. “Hallelujah it’s Christmas!” is a seasonal celebration of all that is Handel, from moving arias to triumphant choruses.

The concert starts with “Zadok the Priest”, which has been sung at every Coronation since 1727. The evening will include two other of Handel’s Coronation Anthems, arias from the soloists, including “Let the bright seraphim”, sung at the wedding of Prince Charles and Diana Spencer, and ends with highlights from Messiah.

Musical Director Iain Duffin explains the composer’s popularity today: “Handel, although German, wrote his compositions in English. This has made his works accessible and loved by audiences, even those who might not regularly attend classical concerts”.  Handel’s wonderfully stirring and memorable melodies, now nearly 300 years old, make him a firm favourite for choirs to sing as well.  The choir has welcomed a number of new members this season to share in the enjoyment of performing Handel again.

Guest soloists for the evening are Hannah Hickman (Soprano), Andrew King (Tenor) and Iain Stockley (Bass). “I’m lucky that such a fine set of soloists are all friends of mine. It adds a lovely personal dimension to perform with people you’ve known for years” said Iain Duffin.

Highlights from Handel’s Messiah include many of the well-known and uplifting favourites. True to the concert’s title, the evening finishes with the spectacular “Hallelujah” Chorus. An exciting and stirring concert can be expected for performers and audience alike.

Tickets for the concert are available from Malmesbury Abbey Bookshop, emailing tickets@malmesburysingers.co.uk or from choir members.