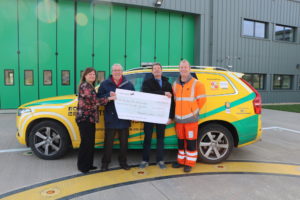 Malmesbury League of Friends (MLOF) has donated a second sum of £25,000 to Wiltshire Air Ambulance (WAA).
For part of last year, the charity had to lease a helicopter after its Bell 429 aircraft was grounded for technical reasons. The cost of the lease exceeded £100,000, which was not budgeted and therefore made a major impact on its finances.
Nevertheless, it still undertook its most missions since the Melksham-based WAA became a stand-alone air ambulance, with no direct government funding, in 2015.
According to the latest figures, last year it undertook 1,233 missions, with 920 via its rapid response cars and 313 by helicopter. More than one third, 479, were carried out at night. 23 took place in the Malmesbury area.
One of these, Rick Dalgleish, 73, a former airline pilot, who lives with his wife Jean in nearby Charlton, suffered a major cardiac arrest in August and was airlifted to the BRI in Bristol where his life was saved.
MLOF chairman David Hide said: “This is the second sum of £25,000 we have donated to WAA, which carries out such important work in Wiltshire and surrounding areas, and continues to be supported entirely by voluntary donations. We are delighted to have contributed towards the additional and unexpected cost of leasing another helicopter and so enable the WAA to continue with its vital work.”
Barbara Gray, Director of Income Generation and Communications for the charity, said “ We are so grateful for the continued support of the Malmesbury League of Friends and their generous donation of £25,000 towards the additional costs we incurred by leasing a replacement helicopter last year.
“ In our rural county, our helicopter can reach locations which are inaccessible  for land ambulances, enabling our critical care team to treat seriously injured or unwell people in a timely manner.
“ On average, we are called to three incidents a day in our helicopter and Rapid Response Vehicles (cars). These have the same specialist medical equipment that is on board the helicopter, so when one is unable to fly, we can still provide gold standard medical care to patients.”