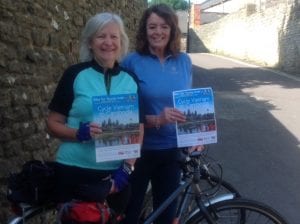 Two Malmesbury women, who will be getting on their bikes to cycle over 450 kilometres through Vietnam and Cambodia this autumn to raise funds for three child cancer charities, are holding a major fund raising event, featuring the legendary Dubious Brothers, in Malmesbury Town Hall on 30th September, as part of their fund raising campaign.

Bron Maclennan and Diana Boulton will be joining a team of cyclists riding through the two Asian countries to support CLIC Sargent, Children with Cancer UK, and Teenage Cancer Trust.

The Malmesbury fund raising dance will help Bron and Diana towards their  individual targets of £1,800, every penny of which will be shared among the three charities as they will be paying all their expenses, including return flights.

Bron, who has raised thousands of pounds for both local and national charities,  said: “We both feel passionately about these three charities, me especially, as my son, age four, had leukaemia and I know the terrible traumas children and families go through. These wonderful charities are real life lines and give so much support to everyone involved. So we do hope many local residents will support what we promise will be a fantastic evening”.

Tickets for the dance, at £15 each, can be purchased at the Persephone Violet Flower Shop in Malmesbury High Street, or through: