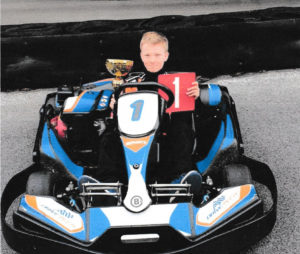 Jamie Watson (Swindon) lined up on pole for the grand final for the 8th and final round of the 2020 Castle Combe Junior Spring Championship. It was Championship leader Jake Holley (Melksham) who made his way into the lead to take victory and fastest lap to take the championship with a maximum score. Jamie Watson (Swindon) took 2nd place with Luke Cridland (Chippenham) completing the podium in 3rd. Bertie Thomas (Winscombe), Round 7 winner, continued his good run of form to take 4th place in both the race and the Championship also securing the Best Novice for drivers in their first full championship. Leo Bell (Chippenham) took 5th ahead of Freddy Watts (Melksham), with Jago O Neill (Malmesbury) taking 7th in the A Final.

Ben Frankcom (Bristol) was unlucky to end up in the B Final, but drove brilliantly to hold on from Ryan Taylor (Bath) and Thomas Hughes (Bristol). Ryan made his way into 2nd from 3rd on the grid, but Thomas was able to find a way back through into 2nd with Ryan finishing 3rd.

Thomas Antrobus (Corsham) put in a brilliant race in the C Final to take victory.