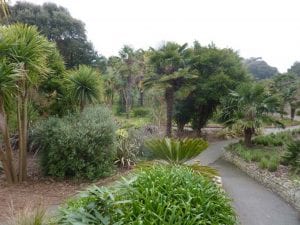 “There are more attractions per square mile on the Isle of Wight than anywhere else in the UK,” reveals Peter Vail, General Manager of the Isle of Wight Steam Railway.
As the island measures just 23 miles from east to west and 13 miles from north to south it makes a fabulous destination for a family holiday because much of it can be covered in a week.

The ferry crossing by Wightlink from Portsmouth to Fishbourne only takes 45 minutes and is just enough to make my wife, daughter and I feel that we have travelled abroad! This is my daughter Harriett’s first experience of a ferry and she loves watching the waves tossing against the side.

We tour the island in a Lifestyle 624 motorhome manufactured by Marquis in conjunction with Swift. This five-berth vehicle allows us to stop and set up home wherever we please, which is particularly helpful when daughter Harriett needs feeding. The Thetford gas stove boils milk especially quickly. Indulging in a spot of wild camping means that we are not tied to any campsites either. The vehicle carries enough water for a day or two while the gas supply was sufficient for cooking and heating for the week. It is easy to see why radio DJ Johnnie Walker and comedian Marcus Brigstocke enjoy holidaying in their motorhomes.
Surprisingly there are plenty of user-friendly walks on the Isle of Wight for those of us with pushchairs. Although quite hilly it is a great way to keep fit and truly rewarding when discovering muscles long since forgotten. There are some stunning five star beaches too, while decent fish and chips are plentiful. What more could a family possibly want?

The weather is generally good, if a little changeable. It’s no surprise to discover that Charles Dickens, Alfred Lord Tennyson and many an eighteenth century watercolourist found inspiration on this beautiful island. In fact, during his stay at Winterbourne Country House in Bonchurch in 1849, Dickens wrote some chapters of his famous David Copperfield novel. He felt that this quaint little village was “the prettiest place I ever saw in my life, at home or abroad”.    Indeed, no visit to the island can be made without acknowledging its plentiful history. There are churches dating back to the 11th century and countless period properties. The National Trust’s Bembridge windmill is the only remaining one on the Isle of Wight while Osborne House and Carisbrooke Castle have interesting Royal connections. Train buffs are sure to enjoy the Isle of Wight Steam Railway. “Over 100,000 people visit us each year,” says the railway’s Peter Vail. The clickety-clack of the steam train travelling along the track from Havenstreet to Wootton reminds you of Agatha Christie’s Miss Marple as some were filmed on such locomotives. Sitting comfortably in First Class – while everyone else made do with Third – there were comfy sofa-like seats, a wood interior and old photographs of Hampshire scenes. Added to which the distinctive chugging sound, the occasional whistle and smell of the steam train all add to the experience as it makes its way through the beautiful Isle of Wight countryside.

Another appealing point of the island is its plethora of free attractions. Ventnor Botanic Garden is one such place where there are hundreds of different plants and trees creating a very picturesque scene.
Life on the island is very pleasantly much slower than the rush dash of the mainland and if you want to feel like you’ve been abroad without the hassle, then this is certainly the place to visit.  Watch the videos at www.travelwriter.biz

Tim Saunders is an author, journalist and businessman. He meets celebrities, goes on holiday and road tests cars.