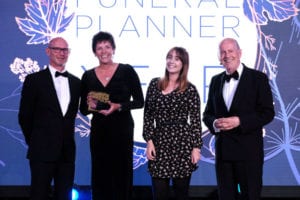 On 21st September Odette Drummond and Sara Jones of Odette Funeral Director attended the Golden Charter Funeral Planner of the Year Awards at The Royal Lancaster Hotel, London.  The family run business was again nominated for top funeral planner for West England.  Again, for the second year in a row they won their category.

Odette Drummond said “It is a huge achievement for us and I am so proud.  Myself, Sara and Tom work hard for our families and as much goes into our Pre-Paid Plans as do our funeral arrangements.  There is a lot of choice and decisions to make and we offer our advice and support at this crucial time.”

Sara added, “We are completely dedicated to our roll in the community and to be recognised in this way is a fantastic achievement for all of us.”

The awards are run by Funeral Plan provider Golden Charter, the largest independent sellers of plans.  The host for the evening was writer, broadcaster and former MP Gyles Brandreth.

In addition to the Funeral Planner of the Year accolade, the Woodland Trust has dedicated trees on behalf of Odette Funeral Director, which are to be planted locally at Clanger Wood near Westbury in recognition of the company’s achievement.