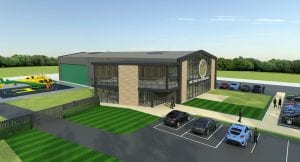 The charity was granted Outline Planning Permission for the site in February 2016 by Wiltshire Council and it carried out public consultation on the proposed design of the operations centre in June 2016.

The new home will bring together WAA’s helicopter, aircrew and charity team onto one site for the first time.  The site at Outmarsh Farm is ideally situated in the centre of Wiltshire as it would allow the helicopter to reach all parts of the county within 11 minutes, as currently happens from its base in Devizes.

Kevin Reed, Head of Operations at WAA, said:  “The response we had to our proposed plans for our new home during our latest public consultation was overwhelmingly supportive.  We currently lease a hangar at police headquarters in Devizes for our helicopter and aircrew and we rent offices in Calne for our charity team.  Having a purpose-built facility will enable us to have full control over our future and bringing together the aircrew and the charity team onto one site will improve our service.

“As Melksham does not have an ambulance station, we believe that Wiltshire Air Ambulance would provide enhanced medical cover for the area. Our paramedics are trained in critical care skills and as well as responding in our helicopter, they can also respond to emergencies such as road traffic collisions, heart attacks and strokes in a Rapid Response Vehicle (car).”

The design of WAA’s proposed new home is a two-storey building of just under 1,500 square metres.

Set helicopter departure and approach routes have been identified to avoid populated areas. In addition, no fly zones will be applied over Bowerhill, Berryfield and Semington, unless the helicopter is attending those areas.

The new planning application can be viewed online at www.wiltshire.gov.uk and the reference number is 16/09699/FUL.