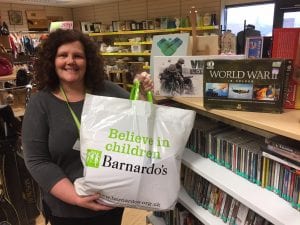 A Chippenham charity shop is celebrating a big boost in the number of donations received last year.

Barnardo’s opened a store in Lodge Road, next to the Tesco Express in Pewsham, in 2013.

It also received more than 3,800 hours of support from local volunteers during the same period.

Manager Sue Coles has been delighted by the store’s growing popularity and success.

She said: “In the early days there were several staff changes which meant we sometimes suffered from inconsistent opening hours, but everything has settled and we now have a permanent team in place.

“The number of donations seems to be growing year-on-year which is a great reflection on the generosity and support of the local community.

“On one occasion a lady left a massive bag of Karen Millen shoes which were probably worth a total of more than a thousand pounds!”

Sue added: “We’re so lucky to have such a fantastic team of volunteers from teenagers to the retired.

“Everyone says how friendly we are, and we’ve even been surprised by gifts of chocolates, flower and biscuits from appreciative donors and shoppers.

“It’s great that we’re able to enjoy our work while raising money for such a good cause.”

The Barnardo’s store is open seven days a week and welcomes donations of good-quality clothes, books, DVDs, toys, games, accessories and homeware, as well as offers of help from potential volunteers.

Call (01249) 445524 orLast year the charity supported 248,000 children, young people and families through more than 990 services across the UK.visit www.barnardos.org.uk/volunteering