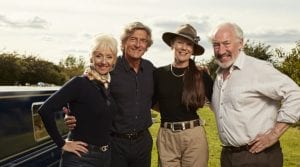 In November 2016, they were filmed visiting the important industrial heritage site of Pewsham Locks just south of Chippenham, between Pewsham estate and Lacock. The visit was one aspect of a trip the four celebrities (plus dog Alfie) took along the Kennet & Avon Canal, when they attempted to navigate a narrow boat along the restored waterway for the first time, getting to grips with mooring, steering, cooking on-board and local swans. See item:

The visit was aired on Channel 5 as part of a series of four programmes at peak time on Friday evenings, helped to publicise this exciting and important local restoration project.

Simon Callow, being very interested in heritage, had asked to visit a restoration site, and so the visit to Pewsham Locks was arranged after Channel 5 producers approached Dave Maloney, chair of the Melksham, Calne & Chippenham Branch of the Wilts & Berks Canal Trust.

Malcolm Hitchinson who organised the day said: “We were delighted to welcome the four celebrities, plus dog, plus film crew to Pewsham Locks. It is a fascinating site which used to be the centre of much canal activity: three locks to negotiate, a lock cottage for the canal agent, a dry dock and workshop for boat building and repairs, a sawpit and a lime kiln. Simon and Nigel were incredibly interested in everything they saw, and really empathised with the lives of the boat people who must have passed through here. They even mused about the opportunity for creating a rich historical drama, especially as they were becoming so interested through their own experiences of travelling along the Kennet & Avon Canal.”

Lorraine and Debbie were fascinated to hear about the fantastic work achieved by the brilliant local volunteers, and were very interested in how the trust attracted new volunteers. Both were particularly interested in wildlife, Lorraine’s ambition being to see a kingfisher.

Volunteers Ray Canter and Jeff Dawes had the challenging job of making bricks, leaks and bank erosion into riveting conversation pieces. Ray said: “Both ladies were absolutely lovely, and time just flew by. They were chatty, enthusiastic, not at all worried about keeping up appearances, and really interested in absolutely everything, although the number of people on the towpath did rather reduce our chances of seeing a kingfisher on that particular day.”

The original idea was for the celebrities to actually get involved in the restoration (a bit like Michael Portillo), but this was shelved on the day due to lack of time. Malcolm added: “It was quite a challenge to think of a safe, accessible, interesting task which would only take a short time, but in the event, they were so interested to see and discuss all aspects of the site, that all our preparations were unnecessary. Never mind, they may come back and volunteer for us in the future – we gave them all a membership leaflet, so you never know!”

The Wilts & Berks Trust is always delighted to welcome new members and volunteers to help with this amazing community project. The Pewsham Locks site is part of a national Heritage Heroes Project in partnership with the Canal & River Trust and Help for Heroes, funded by a grant from the People’s Postcode Lottery.

For more information, please visit the website: www.wbct.org.uk and see how you could get involved.