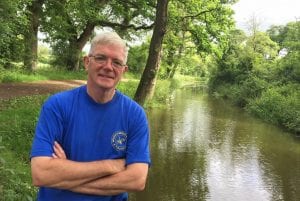 A POPULAR stretch of restored canal is finally full of water for the first time in more than a century.
Volunteers with the Wilts & Berks Canal Trust have spent years breathing new life into the former link between Chippenham and Lacock, as part of a wider campaign to rebuild the entire network.
Several sections in the open countryside near Pewsham had been excavated and filled with water but they remained separated by large bunds of earth while culverts were restored and leaks were plugged.
The work was recently completed and there is now a continuous stretch of canal from the bottom of the former flight of locks near Pewsham to the impressive Double Bridge near Reybridge – a distance of almost 1.2 kilometres.
The charity’s workboat can travel the entire length of the route, meaning craft are moving back and forth along this line of the canal for the first time since the 1900’s.
Much of the restoration has been carried out by teams from the Melksham, Chippenham & Calne branch of the Canal Trust.
Branch chairman Dave Maloney said: “There was a time not so long ago when this entire section was overgrown and largely forgotten, and sometimes used as a dumping ground for rubbish.
“Now, thanks to the dedication and commitment of our hardworking volunteers, it’s probably similar to how it would have appeared more than a century ago when it was an important link between local towns. It’s an amazing achievement.
“This stretch already contains a restored bridge, spillweir, wharf and other structures, and at the Pewsham end you can also see the remains of the lock-keeper’s cottage and the dry-dock which we hope to rebuild at a later date.
“It’s a wonderful example of our industrial heritage.”
The Wilts & Berks Canal once linked the Kennet & Avon Canal near Melksham to the Thames & Severn Canal near Cricklade and the River Thames near Abingdon, connecting Chippenham, Calne and Swindon.
It opened in 1810 but eventually fell into decline and disrepair due to competition from the railways, until most of the water was lost after the partial collapse of an aqueduct in 1901. The canal was finally abandoned in 1914.
Today, volunteers hope the restoration will provide a multi-million pound boost to the local economy through increased tourism and employment, as well as creating a new wildlife corridor for a wide range of different species.
The latest work along the Pewsham stretch was completed after a grant from the Chippenham Area Board allowed a sunken part of the towpath to be raised, meaning the water level in the canal could be increased to the same depth along the entire length.
Volunteers can now use the workboat to keep the channel clear while carefully removing reeds and overhanging branches, once the nesting season has concluded.
Dave added: “The Pewsham stretch is a prime example of the progress we’re making and we hope that our latest achievement will inspire even more people to support the restoration campaign.
“Aside from people who can help with fundraising and engineering, we’re particularly keen to recruit volunteers who can help with the physical tasks such as bricklaying, digging and grasscutting, especially those with specialist skills such as using chainsaws.
“This part of the canal is already hugely popular with walkers, runners and cyclists but we’re confident that one day it will be popular with boaters too.
“Wouldn’t it be great if our children, grandchildren and great-grandchildren could one day walk along the towpath and proudly say that their family helped to bring it back to life?
“Together we can leave a lasting legacy for future generations to enjoy.”
Visit www.melkshamwaterway.org.uk or www.wbct.org.uk
Picture: Volunteer Dave Maloney alongside the restored Wilts & Berks Canal between Chippenham and Lacock