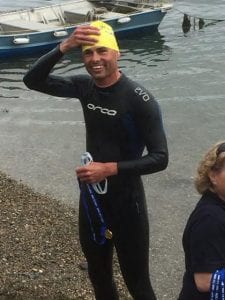 Mark Rickaby, director of Wiltshire accountancy firm Sunflower Accounts Ltd, set himself a challenge – to swim a long distance in the sea to raise money for charity.

The 38-year-old father from Calne, has an incurable condition Ankylosing Spondylitis (AS) which affects the lower back and can lead to fusing of the bones of the spine.

A national charity, founded in Bath, NASS (National Ankylosing Spondylitis Society) supports people like him but receives little funding for its research. Mark decided to make a contribution and aimed to raise £250 from his swim of almost 3km.

Thanks to the support of friends, family and members of the Wiltshire business community, he more than doubled his target.

Mark said: “I’m overwhelmed by the support shown to me in this very personal challenge I set myself. Money is still coming in. To date, I’ve raised more than £600 which is just amazing. I’d like to thank everyone who has made a contribution.”

As co-founder of Sunflower Accounts with his wife Steph, the couple have pledged to raise funds for NASS throughout 2015. Mark’s swim took place in Cornwall last month.

It’s estimated about 200,000 people in the UK have AS and the average age at which symptoms occur is 24. It’s often called arthritis of the spine.

If you wish to see a short film about his charity swim – visit: Sunflower NASS Charity Swim