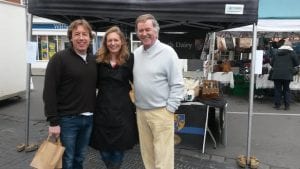 THERE’S A BIG CHEESE on the Wiltshire food scene for which the awards and acclaim are pouring in thick and fast.

From farmers’ markets, wholesalers and shops to pubs and restaurants across London and the South West, its dairy delicacies are snapped up by foodies wherever they appear.
Thanks to its personal Wedding Cheese cake service, Brinkworth is also a hit with brides and grooms.

The Dairy’s constant championing of its home county – the cheeses are named after local places – is helping to put Wiltshire well and truly on the gourmet map. And its recent revival of an 18th century popular cheese, Wiltshire Loaf mentioned in two of Jane Austen’s novels, is signposting even more people to the area.

Today’s its pedigree Friesian herd grazes on traditional lush pastures of the Dauntsey Vale to produce high quality milk and the full range of dairy products.

The cheeses alone are enough to have one reaching for the crackers.  Along with the revived Wiltshire Loaf – winner of the British Cheese Awards’ Best Territorial Cheese – are Brinkworth Blue, Garlic and Pepper and the Royal Bassett Blue.

To find out more about Brinkworth Dairy, go to www.brinkworthdairy.co.uk.