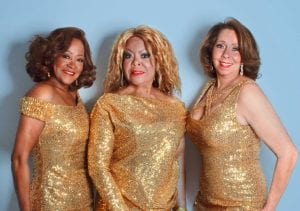 Celebrating over 50 years in the music industry The Three Degrees are bringing their perfectly coordinated dance routines and flawless vocal harmonies, back to the UK in 2017. The tour starting in March will see the legendary trio perform a soulful set packed with the classic songs we all know and love.

Since forming in 1963 in Philadelphia, The Three Degrees found worldwide fame, achieved platinum album sales and released timeless singles that compounded the success that has spanned decades.  Arguably best known for their major hit ‘When Will I See You Again’ which topped the charts here in the UK, the U.S.A, Japan and a host of European countries, the trio have notched up 11 top 40 UK singles including the top 3 smash ‘Woman in Love’ as well gold and platinum albums internationally.

Although being formed in the U.S.A, The Three Degrees have found a second home with the UK, having recorded one of their two live albums in Leicester that reached No.6 in our charts. They were also given the honour of performing at the 30th birthday celebration for Prince Charles, at Buckingham Palace, and in 1981, they were invited guests at the wedding reception of Princess Diana and Prince Charles. Dubbed by the media as ‘Charlie’s Angels’ this cemented the trio as household names in the UK.

The band has continued to tour tirelessly with their shows seeing fans from every generation packing out venues across the globe, one third of The Three Degrees Valerie Holiday said:

“For us, it is still exciting and we still enjoy our work, we are blessed with a wide age group appeal….from fifteen to sixty-five.  This is why we have survived, I think. We learned and were taught how to entertain and even before we had hit records, we knew how to do our job — our choreography, our costumes, the lights…these were all things that we learned at an early age.” “I think we have done many firsts in our career.” Helen Scott adds. “We have opened a lot of doors for other entertainers. In some cases, we may not have always succeeded but we have never given up. It still amazes me when we see teenagers singing along with our songs. And yet we still have the fans who have grown with us.”

After five decades of existence, The Three Degrees are in The Guinness Book of World Records, as the ‘Longest Running Female Vocal Trio in history’, and they show no signs of slowing down.