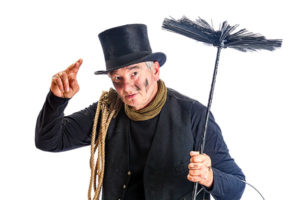 Spring is here, and with it the

urge to make everything clean and

fresh, including the chimney. If your fireplace is clogged and sooty from use during the cold winter months, now is the time to call a chimney sweep. This skilled high-tech profession has a rich and dark history.

The profession of ‘sweep’ dates back to the 16th century. Originally the service was needed only by the wealthy with grand estates, but gradually the trend of installing chimneys in every home caught on, and the demand for sweeps grew. The houses in city streets were tightly packed and sweeps would work from house to house, sometimes roof to roof, cleaning sooty chimneys.

In the 17th century the government introduced a hearth tax, based partly on the number of chimneys a house possessed.  People wanted to avoid the tax, so builders connected flues of new fireplaces with the existing chimney, creating a maze of narrow, pitch black tunnels inside homes.

When people switched fuel from wood to coal, chimneys became coated with sticky soot deposits. These had to be cleaned frequently; otherwise, the house filled with toxic fumes. So, chimney sweeps became associated with restoring fresh air in homes and thus became symbols of good health.

Unfortunately, the sweeps themselves did not enjoy good health. Tiny children between 4 and 11 years old became the primary ‘tools’ used for cleaning because they were small enough to squeeze through the narrow, maze-like chimneys. It must have been a terrifying job, working without light in suffocating cramped conditions. The children, known as ‘climbing boys’ were either sold by destitute parents or were chosen from orphanages. Their job was to scrape the coal deposits from the flue lining.

If a young child was afraid to climb, the master would sometimes light a small fire to ‘motivate’ him to move. It’s actually where the phrase ‘to light a fire under someone’ originated.

The boys’ only official day off was May Day, and in Rochester they still commemorate this with the Sweeps Festival (sadly cancelled this year) involving three days of fun, real ale, music, and dancing across the bank holiday weekend.

These children suffered bone malformation, soot inhalation, and cancers. Some of them became trapped and died of suffocation inside chimneys. Most didn’t make it to middle age.

After many humanitarian appeals to Government, in 1864, the English Parliament finally passed the “Act for the Regulation of Chimney Sweepers” which made it illegal to send a child up a chimney.

Today’s professional chimney sweeps are educated in the science of chimneys and fireplaces as well as in building codes.  It is important to employ a qualified professionally trained sweep, from a recognised organisation, so you know they are well-trained and fully insured. Many are also skilled to carry out appliance servicing and fitting chimney cowls etc.