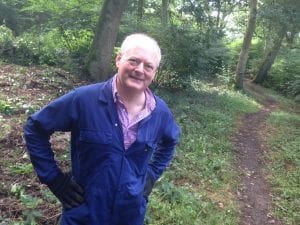 A dedicated group of Chippenham volunteers are looking for extra help as they prepare for the tenth anniversary of a local nature reserve.

Mortimores Wood is a haven of tranquillity alongside the River Avon, a short distance from the Sustrans cycle route south of Pewsham.  The ancient woodland has a recorded history extending back more than 800 years and once formed part of the Royal Forest of Pewsham when it was used for hunting.

Today the 3.5 acres are owned by the Chippenham Borough Lands Charity but maintained by a small team of hardworking local residents who meet once a month.   Next year will be the tenth anniversary of it being designated as a Local Nature Reserve and so the Mortimores Wood Volunteers hope to recruit more people to improve the site before a celebratory event in 2017.

Chairman Colin Truman has been with the group since soon after it was formed in 1994.

He said: “For centuries the wood was subjected to coppice management where large trees were allowed to develop but smaller trees were cut back every few years to allow more sunlight to reach the ground, encouraging a wide variety of flowers to flourish.  However, in modern times this management wasn’t taking place so the flora of the woodland was in danger of being lost.  So we meet once a month to restore the system which resulted in this diversity, to maintain the predominant character of the wood, and to improve public access in some areas.  There is a now a regular cycle of cutting and growing which allows an abundance of amazing flowers to become established.”

Surveys have identified 16 species of trees and almost 60 species of ground flora across the coppiced area, and volunteers have created wooden steps down the slope to the bank of the River Avon. New saplings are also planted.

The woodland is now a popular spot for dog-walkers and anglers, and attracts a wide variety of wildlife.  This includes deer, badgers, squirrels, voles and rabbits, as well as buzzards, kestrels, sparrowhawks, woodpeckers and bats.

Colin added:   “There is now a lot more flora and fauna than when we first started, and the whole area looks absolutely beautiful during the changing seasons – especially the spread of bluebells in the Spring.  We all get a great deal of pleasure from planting new trees and watching them grow but we know that we could achieve so much more if we had some extra help.  We would love to welcome new volunteers of all ages.

We’ve currently got a group which ranges in age from their teens to their 60s.   No experience is needed as we provide all of the helmets, gloves, tools and training, but we are particularly keen to have someone with a chainsaw licence if possible.   Otherwise there are plenty of simple tasks such as planting saplings, clearing brambles and removing litter.   It’s a lovely way to get some fresh air and exercise in a peaceful setting.”

Workparties take place on the second Sunday of every month, weather permitting, and last from around 10am until 1pm.

Piles of cut hazel trees are also available for a small donation.

Picture: Colin Truman, chairman of the Mortimores Wood Volunteers, in the ancient woodland on the edge of Chippenham