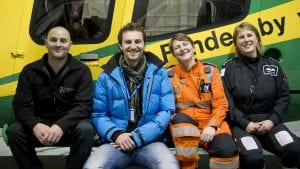 PATIENTS whose lives were saved by Wiltshire Air Ambulance have praised the service, as it marks the first year operating as a stand-alone air ambulance with a 10% increase in missions undertaken.

Wiltshire Air Ambulance (WAA) has been operating since 1990, but 2015 was the first year as a stand-alone air ambulance using its own new state-of-the-art helicopter, a Bell 429. For the previous 24 years WAA shared a helicopter with Wiltshire Police.

WAA conveyed 145 patients to hospital and treated another 195 patients on scene.

Pete Burch, 27, of Ashurst, Hampshire, was seriously injured when he was involved in a collision on his motorcycle while on a ride out with friends and his father on the A30 just outside Salisbury on 7 March 2015.

WAA flew him to Southampton General Hospital, a major trauma centre in six minutes. He underwent nine hours of surgery to reattach his left arm. He was discharged three weeks later and has undergone extensive therapy for his injuries.

Pete, who now fundraises for the charity, said: “Without question Wiltshire Air Ambulance saved my life. I have been told by the crew that I would not have survived the 20 minute road journey in an ambulance to Salisbury Hospital, which was the nearest hospital. As it happened I needed a major trauma department, the closest being an hours drive away in Southampton. The six minute flight to Southampton General Hospital is the only reason I am still alive.”

The speed of the Bell 429 and expertise of the air ambulance crew also proved lifesaving for Adam Gibbs, 17, of Pewsham, Chippenham. He went to Chippenham Hospital’s Minor Injury Unit after he injured his abdomen while riding his bicycle on 16 June 2015.

Concerned staff called WAA and the paramedics suspected internal bleeding. Adam was stabilised and flown to Southmead Hospital, Bristol, in 12 minutes. He underwent surgery on a ruptured spleen soon after his arrival. He was discharged after six days and was able to attend his end of year prom at Abbeyfield School, Chippenham, 10 days later.

His mum, Pippa Gibbs, said: “Adam’s condition was life threatening. He was deteriorating while the air ambulance was carrying him. As a family we are beyond grateful. Wiltshire Air Ambulance is a brilliant service, we are so thankful to have it. Adam is fully recovered and enjoying life. He passes on his thanks as he is now able to attend Wiltshire College studying Level 3 games development and working part-time at Wetherspoons in Chippenham.”

As a stand-alone air ambulance WAA has two highly trained paramedics on board, able to carry out surgical techniques on critically injured or ill patients by the roadside and to administer additional drugs for pain relief or sedation.

Wiltshire remains the only air ambulance in the UK to use a Bell 429 helicopter. The state-of-the-art helicopter is faster than the previous helicopters WAA has used, enabling a rapid response to incidents within minutes. The Charity leases the Bell 429 from Heli Charter.

David Philpott, Chief Executive of WAA, said: “All of us in the charity team, the aircrew and our volunteers are proud to provide an essential helicopter emergency service for people living, working and travelling through Wiltshire and surrounding counties.

“The Bell 429 is a modern and faster helicopter and we are pleased with how it has performed. It goes without saying that we can only provide an air ambulance service because of the generosity of the public, businesses and grant making trusts, who raise funds for us day in and day out. On behalf of everyone at Wiltshire Air Ambulance, thank you for your continued support.”

Wiltshire Air Ambulance is available up to 19 hours a day, 365 days a year.

The Charity’s new helicopter started operating on January 9th 2015 and is the first Bell 429 to operate as an air ambulance in the UK. It has a top speed of 156 knots (180 mph) making rapid response to any incident within the county achievable within minutes. The aircraft is fitted out with the most recent Aerolite equipment to meet the highest helicopter emergency medical service (HEMS) specification.

Wiltshire Air Ambulance is a charity and relies almost entirely on public donations to keep flying and does not receive central government funding.