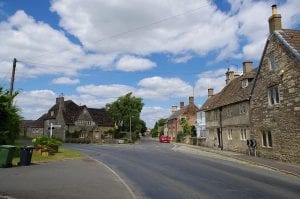 If you should point your car west of Chippenham and head five miles or thereabouts from the east border of south Gloucestershire, close to the turn off for the famous Castle Combe racing circuit, another turn off will lead you to the delightful picture-postcard village of Yatton Keynell.

A typically, delightful Wiltshire village hardly changed in the last three hundred years or so, the village is first mentioned in the Domesday Book as “Getone”, the “Keynell” appearing sometime in the 13th century, believed named after one Henry Caynell who had a sizeable holding in the area. In 1242, his family bestowed a large amount of their land to “Stanley Abbey”, and in 1250 Sir William Keynell built a church as a thanks for his safe return from the Crusades.

He was responsible for giving the village its present name by the building of the church, which although its 15th century tower still stands, the building was mostly redesigned by George Edmund Street as part of a restoration in 1868. Dedicated to St. Margaret of Antioch when the original building was completed in 1258, it had an unusual addition added to it before its restoration – in 1835 a small chapel was added named the “Ebenezer Chapel”, especially for the “free church” worshippers.

Across the road from the church stands the “Bell Inn”, named no doubt after the church bell tower, but ancient deeds from 1764 show its original name to have been “The Old Inn, and the remains of out houses, stables, a brew house, orchard and garden are still faintly visible. The old toll road (now the B4039) leading to Castle Combe had a toll booth there until its closure in 1871.

The horribly named “Smallpox Farm” stands on the road to Grittleton. Once a well run smallholding, its later name came from the fact it was used as an isolation hospital and dwelling for the sick and those dying of the disease in the late 17 hundreds, by then showing little or no signs of its days as “Park Farm House” . An unusual milestone at the base of a wall shows Hyde Park Corner, London, as being 97 miles away, and Jodbury being just 11 miles away. The nearby tiny hamlet of the quaintly named “Tiddleywink” made headlines as recently as 2003 when the locals campaigned to have it officially named on area and national maps.

Like most small hamlets and villages, Yatton Keynell can boast a primary school and general store, also a few smaller businesses like an Allington Farm Shop and pub, and an annual Summer Fete takes place every year in June, with a delightful Christmas market each December. There is also a village hall where many functions take place, a driving range, and golf course. The cottages are a delightful mix of white washed walls and mellow Cotswold stone , and the village is somehow sleepy and vibrant at the same time, with flowering shrubs tumbling over dry stone garden walls and hanging baskets gently swaying from cottage porches with sweet smelling flowers doing their best to climb out of the restraining baskets.

Perhaps one of Yatton Keynell’s biggest claims to fame is that the ship “Angel Gabriel”, which carried Sir Walter Raleigh to Guiana in 1595 was financed by Sir Charles Snell, who did it by selling off large chunks of his local land. His family however managed to hold onto their home, The Manor House”, in West Yatton.