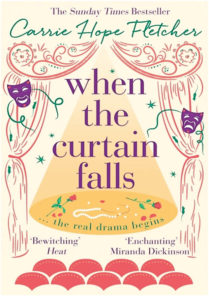 When the Curtain Falls by Carrie Hope Fletcher

Somewhere in every town or city is a special place. A place where real life is suspended, and you can forget about your problems. A place that shows us life in all its details. The ups and downs, love, death, joy, and sadness. It shows us life as we wish it was and life as we hope it will never be. That place is of course, the theatre. This novel catapults you into that world and provides a fascinating glimpse of life backstage where the audience usually never get to venture.

Part romance and part ghost story When the Curtain Falls switches between the present day and 1952, where two young lovers try to steal moments together backstage as life begins to echo the drama being played out on stage. Tragedy strikes and one of them is destined to remain forever haunting the dressing rooms and fly floor high above the stage. Nearly 60 years later and their fateful play is revived at the same theatre. Among the cast are Olive and Oscar, also stealing moments together to keep their budding romance secret. But strange things start to happen as a previous occupant is reawakened.

Sometimes (especially right now) you need a light, easy-to-read, novel for a bit of escapism. When the Curtain Falls fills that brief. It won’t win any literary awards, and sometimes the character development feels rushed, but it has a certain level of charm. Fletcher herself has grown up in the theatre and anyone who knows her cannot help but picture her when Olive is described. But that only adds to the fun.

Into the Spotlight by Carrie Hope Fletcher

Yes, that’s right: Fletcher has also written our children’s novel this month. Published in September last year I was eagerly awaiting its arrival, having pre-ordered it 6 months earlier. Why? This story tells of the three Pebble children who live in a theatre. Not related by birth they were adopted when they were found by Brilliant Aunt Maude – or BAM – in her various travels around the world. If you think this sounds as if it might be the opening of another story, then you might be right. This novel is inspired by Noel Streatfield’s classic, Ballet Shoes: a story that helped to give many young readers a love of the theatre, myself included.

Whilst playing in an old dressing room in the theatre, the Pebbles find an old diary, and in its pages they learn of the Fossil children, Pauline, Petrova, and Posy. For fans of Ballet Shoes this offers an insight into their lives after the end of the original story and you find out if they fulfilled their dreams.

But their excitement at reading the diary is soon dampened when they learn that the theatre is losing money and will have to be sold. Can the three children help to save the theatre they love so much?

Once again Fletcher brings her experiences of being a child in the West End to this story and does the legacy of the Fossils proud.