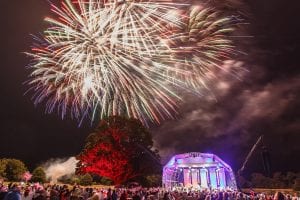 Classic Ibiza and The Great British Prom to visit one of Wiltshire’s best loved stately homes on Saturday 5th and Sunday 6th August 2017.

Bowood House & Gardens in Wiltshire will be hosting two not-to-be-missed nights of live classical music next summer that cater for very different tastes. On Saturday 5th August, revellers will be able to witness the Urban Soul Orchestra (USO) and DJ Goldierocks bring some of the biggest dance tracks from the last 20 years to life. On Sunday 6th August, The National Symphony Orchestra, conducted by world-famous Anthony Inglis, will perform The Great British Prom, a veritable feast of iconic music from all corners of the UK.

USO will start Classic Ibiza with a fabulous “chill-out” set featuring some of the most iconic Ibiza tracks including, Nightmare on Wax’s “Les Nuits”, Massive Attack’s “Teardrop”, Groove Armada’s “At the River” and William Orbit’s version of “Barber’s Adagio for Strings”. During the interval, Goldierocks will take over the stage and fill the Bowood evening air with her creative mix of top Ibiza tunes. Her reputation as an international DJ and broadcaster has seen her establish a celebrity following which includes Madonna, Richard Branson and Jade Jagger, having performed exclusively for them all. Her weekly global radio show “The Selector” goes out to 44 countries and has 4.3 million dedicated listeners every week.

As the sun goes down, the Urban Soul Orchestra returns with vocalists that ooze talent and charisma. Jina Burrows, Roo Savill and Maxamillion Barnes-Davy, will bring their own flavour of Ibiza as they join Goldierocks on stage for the second half of the concert; this is when the party really starts!

“This is a really unique event that sees a contemporary orchestra play live with a DJ and vocalists. The Urban Soul Orchestra is truly on top of its game, having played with some of the world’s best-known names in the dance music industry, including Groove Armada, M People, Nightmares On Wax, Robert Miles and Soul II Soul. I can’t wait to bring the event to Bowood and three other venues next year, following its phenomenal success at Blicking Hall in Norfolk in 2016.”

The following evening, The National Symphony Orchestra will begin The Great British Prom with the National Anthem. This will then be followed by a representation of some truly rousing English classics including the “Dambusters” March, “I Vow to Thee My Country” and “The Archers” theme tune!  We will then move across the water to the Emerald Isle, from where the orchestra will play “Danny Boy”, “Irish Washerwoman Encore” & “Toss the Feather”, a favourite in Irish dance music.

The orchestra will then continue its journey back across the Irish Sea to Wales where the Classical Brit Award winning, Welsh male vocal group “Only Men Aloud” will bring their breath-taking sound to the Bowood audience, in front of the House; they will be singing rugby favourite “Bread of Heaven” and other Welsh classics. Then, it’s time to head north for music from the Scottish Highlands, which will be performed by The Band of the Home Counties Pipes and Drums. Scottish greats including “Skye Boat Song”, “Scotland the Brave” and “Flower of Scotland” will be performed as the pipe band walks up through the centre of the crowd to mark the end of a truly memorable first half.

The second half will see the National Symphony Orchestra, whose international reputation for excellence puts them in the top 4 orchestras in the UK, return to the stage to perform all the Proms favourites including “Rule Britannia”, “Land of Hope & Glory” and British anthem “Jerusalem”.

“NSO is thrilled at the prospect of performing at The Great British Prom. I feel sure that the attractive programme, especially devised for this year’s concert, will delight Bowood. We have a 50-piece symphony orchestra conducted by Anthony Inglis, who has conducted more concerts at the Royal Albert Hall than any other living conductor. We shall faithfully recreate the buzz of the Last Night of the Proms under immense Bowood skies, thrilling to 1812 Overture, being charmed by the dazzling diva Philippa Healey, an entire band of pipers, fireworks, Only Men Aloud and a full symphony orchestra. Unmissable!”

As well as having FREE parking (for both coaches and cars), guests can bring their picnics and champagne, wave their flags, sing along and soak up the atmosphere with friends in the outstanding Bowood setting, surrounded by Capability Brown’s 2,000 acre parkland. The evening will conclude with a stunning fireworks finale over the lake, choreographed to the music.

For full event details and tickets visit www.revival-productions.co.uk or call the event...

Dorothy House Needs You: We Are Asking All Our Supporters to Sign Up as ‘Champions’ in a 36-Hour Fundraising Sprint to Help Secure a Total of £500k So That We Can Provide More Much-Needed Palliative and End of Life Care in Our Community.

Brave Mental Health Worker to Jump 15,000ft Out of a Plane to Support Splitz Support Service